After graduating from the San Francisco Conservatory of Music, I was chosen by Michael Lorimer to be one of his assistants in a year-long master class program in Wilmington, North Carolina. It was 1980, and I had just graduated from the Conservatory where I had been working with Michael a few years earlier. That experience and the year that followed in North Carolina that would make a profound impact on my career. 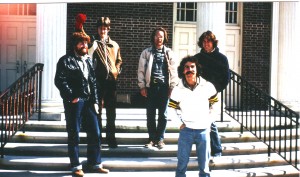 Michael Lorimer, a favorite protégé of Andrés Segovia, caught the attention of American audiences in the early 1970s, through tours arranged by the great impresario Sol Hurok.

I found these two rare videos featuring Lorimer with Segovia. They show the magic and power of his playing — and the interplay between the two is fun to watch. Also, look for the famous scene where Segovia instructs Lorimer to get a sound more like his own, and Lorimer, thinking perhaps it’s Segovia’s guitar that is the formula for a great sound, hands his own guitar to the Maestro. Notice the initial shock on Segovia’s face. In the end, it’s clear that Segovia likes Michael, even his ‘brashness,’ and would certainly not be so indulgent with other players.

Andres Segovia introduced him to the world. He was the first American guitarist invited to perform in major cities of the USSR in 1975, and was received with such enthusiasm that he was immediately re-engaged for a 1977 tour. He has appeared in Israel, throughout Europe, on most major North American recital series, and with the orchestras of Atlanta, Baltimore, Indianapolis, Louisville, New Orleans and San Francisco.

Lorimer’s command of an extensive repertoire is unique. His concerts reflect his enthusiasm for music of many periods and styles ,and often combine traditional classics, Americana, new music, and seventeenth and eighteenth century guitar music performed on a Baroque guitar. In addition to concerts, he gives master classes at North American universities and conservatories from coast to coast. He is an engaging spokesman, in high demand for experimental programs in arts presentation.

My Experience with Michael Lorimer

I will never forget my first encounter with Master Lorimer at a master class in Portland, Oregon in 1975. I had been playing classical guitar for a little less than a year, studying with a number of teachers in the Bay Area. In Lorimer’s playing I heard a sound and approach to musicianship that immediately grabbed me — “This is how I want to sound,” I thought to myself. It was at this master class that I decided I would audition at the San Francisco Conservatory of Music, where Lorimer taught. Michael influenced a lot of guitarists through his engaging master classes across the country and at the SFCM. In addition, his outreach through his Guitar Player Magazine articles explained his approach to a wide range of subjects: choosing repertoire, practice concepts, programming concerts, and more. This was a landmark appointment, as Guitar Player was known for its articles on rock-and-roll guitar, not classical.

Michael Lorimer came to the Conservatory every semester and performed a week-long master class. He was part of that generation that did its part to promote the classical guitar by giving long master classes. He was instrumental in bringing guitarists like Abel Carlevaro, and Pepe and Angel Romero, for week-long classes. That’s where I learned to take notes — I remember my first master class at the Conservatory with Carlevaro — I noticed Michael taking copious notes while I sat there with neither paper or pen, feeling like a fool. He also brought Leo Brouwer in from Cuba for a three-week master class. The weekends were peppered with concerts that featured Lorimer performing one of Brouwer’s concertos, Brouwer performing a program of modern works, and a debut recital by a recent Peabody grad about whom there was much buzz:  Manuel Barrueco.

Studying with Michael Lorimer wasn’t like studying with other teacher. First, he lived in Santa Barbara, California — nearly 400 miles from the Conservatory. This necessitated traveling to Michael’s home where I would stay for a number of days. My first private lesson was pretty intimidating. I was not only studying with my guitar hero, but living in his home. Between my trips south, and Michael’s trips to San Francisco, I worked with him usually twice a semester for about five days at a time. The work was taxing; he was relentless and demanded everything I had, (it always felt like he demanded more than I had). Five days of this intensive study seemed like a semester’s worth of material.

Following my senior year, Michael had been chosen as Distinguished Artist in Residence at the University of North Carolina in Wilmington. He told me I needed to be there, and so off I went, selling one of my guitars to pay for the trip back to North Carolina. When I arrived, I learned that Michael had chosen myself and my roommate, Dominic Bertucci, to assist him in the year-long master class. Our job was to ready the players to work with Michael in the class. We both had been working with Michael for years, and while I felt confident that I knew what he wanted from my playing, I felt daunted getting this from other players. This was made even more difficult by the players natural resentment – these players had not come from all over the world to study with me, and some of them let me know that. I couldn’t blame them. But over time, what I learned was that I had developed a similar ear to Michael’s. In fact, when a student played, I knew not only what he was going to say, but how he was going to motivate the player. This really shaped me as a teacher.

Balance, legato, rhythm. I learned to filter everything I heard through these concepts (I always felt these were concepts he gleaned from studying with Segovia’s style). These three aspects cover a great range of issues that face us guitarists. I also learned a tremendous amount regarding practicing concepts, getting a program ready for performance, and how to be a good performer.

When Michael invited me to the year-long masterclass on an island off the coast of North Carolina all he would say was that this was a year to learn how to make it as a classical guitarist. This ubiquitous statement became clearer as the year progressed; in addition to helping me learn to be a teacher, it helped me as a player and performer. Michael was known for pushing you just about as hard as you could be pushed. Assignments during that year were difficult to impossible, but all had a lesson to be learned. Here are a couple of examples. I remember one night getting a phone call at around 11:30 pm. Michael abruptly told me to be at the local television station by 6 a.m., as he wanted me to play a specific piece, live, on a morning show. Fast forward to 12 years later when I got a phone call late one afternoon from a local television station wanting me to play live the next morning.

Michael also assigned all of us to learn an entire program of new repertoire, in three weeks. In fact, Michael was going on tour for three weeks, and we secretly had a party planned to celebrate our first time alone on the island. Our assignments were given at last class of the week — the party, needless to say, was over before it began. I practiced anywhere from 14-16 hours a day, relentlessly. It was unlike any other experience I’d had. I’d feel that I nailed a passage, and waves of elation would flow over me, only to be dashed to the depths when the same passage would fall apart again. I never thought I could pull this off (and frankly, my performance at the end of the three weeks was pitiful), but I had also never worked harder in my life. Fast forward a few decades. I receive the guitar part to a work for guitar and orchestra on a Tuesday, when the recording was scheduled for Friday. My first thought was, I can do this! And I did!

It’s hard to sum up what I learned from Michael over my years of study. I can tell you this; every day that I touch my guitar, I remember something from my studies, and I continue to strive to bring the same freshness and brilliance to my playing that Michael does. I guess you could say that those few years granted me a lifetime of learning.

I’m happy to add that after a 30 year hiatus I reconnected with my teacher and we began work on my CD Romance for Guitar, which I dedicated to Michael. (You can listen here). That training experience ignited all the excitement I felt 30 years earlier and I look forward to continued work with him in the future.

Feel free to share your ‘Michael Lorimer’ experiences or how your teacher influenced you!