After a long hiatus from their international touring the Chvatal/Kritzer Duo reunites for their first Portland performance in over eight seasons. Scott Kritzer teams up with coloratura soprano Janet Chvatal and special guest baritone Marc Gremm for a concert of romantic arrangements for voice and guitar at Portland State’s Lincoln Hall Auditorium located at 1620 SW Park Avenue on Thursday, October 11th at 7:30 pm. 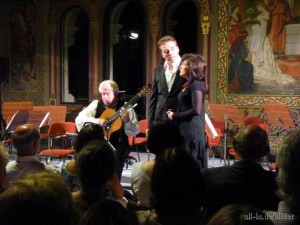 Trio’) with the addition of baritone Marc Gremm. Featured on the program will be works from the Chvatal/Kritzer Duo’s popular Songs of the Americas and In the Blue Hour recordings, as well as fresh arrangements of works by Franz Schubert, W.A. Mozart, and the

Bach/Gounod Ave Maria. Tickets are $25 General Admission, $20 Seniors, and $17 Students, and can be purchased at Ticketmaster or by calling the PSU Box office at 503-725-3307. For more information you can go to Portland State University Box Office.

To hear some of the music that will appear on these programs, you can to go LISTEN.

The transformation of the Chvatal/Kritzer Duo to the Miramont Trio found its roots in last summer’s performances at the Neuschwanstien Castle where Janet, Marc and Scott performed together for the first time. For the story you can go to Neuschwanstein or watch the Neuschwanstein Castle Performance 2011 Slide Show. 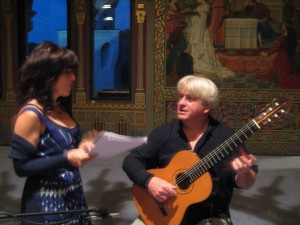 Below you’ll find a detailed listing of other Pacific Northwest dates and ticket information for the Chvatal/Kritzer’s and Scott Kritzer’s performances in the month of October!

Sunday, October 7, 3:00pm at The Freed Gallery in Lincoln City

Tickets can be purchased by calling 541 994 5600. For more information please go to the Freed Gallery.

The Miramont Trio makes its Portland debut in PSU’s Lincoln Hall Auditorium, 16 years after the Chvatal/Kritzer Duo Portland debut. Tickets are $25 General Admission, $20 Seniors, and $17 Students, and can be purchased by at Ticketmaster or by calling the PSU Box office at 503-725-3307.

For more information please go to the Water Music Festival.

Scott Kritzer appears in Oysterville’s historic church for the Water Music Festival on Saturday, October 13th, in a program of mostly Baroque music, arranged for guitar by Michael Lorimer. Works on the program include Tombeaux by four 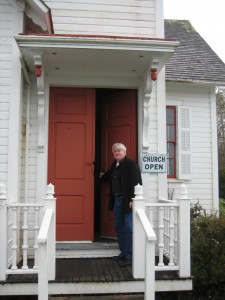 Baroque harpsichordists/lutenists (Froberger, Couperin, Gaultier, and Dufault); the Passacaglia and Sonata in Eminor by Sylvius Leopold Weiss; and the Prelude and Fugue BWV 539a and First Cello Suite by JS Bach. In Mr. Kritzer’s Carnegie Recital Hall debut, Bernard Holland of the New York Times stated that “Scott Kritzer created an inner life in his playing of Bach“.

For more information please go to the Water Music Festival.