After his debut at Carnegie Hall, the New York Times reviewed Scott Kritzer as:

…intelligent and self-assured…with a sure technique and a musical sensitivity, he created an inner life in his playing, a thinking and caring musician.
–Bernard Holland of the New York Times 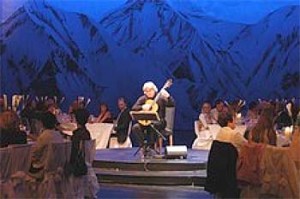 His consummate commitment to technical excellence as the solid structure beneath an unparalleled sense of musicality brought him over two decades of accolades from audiences and critics alike, in concert halls in San Francisco, Frankfurt, Vancouver, B.C., Los Angeles, Sapporo, Washington, D.C., Munich, and New York. He has been featured in Japan’s Guitar Magazine, London’s Classical Guitar Magazine and Guitar International as well as in Soundboard Magazine of the Guitar Foundation of America and Guitar Player Magazine in the United States.

Mr. Kritzer has performed concerts in London’s prestigious Wigmore Hall, Lutheran Hall and Sapporo, Japan, and is often found performing on series that have included Itzhak Perlman, Ivo Pogorelic, Cecelia Bartoli and the Emerson and KRONOS String Quartets. In 1996 Mr. Kritzer was chosen by Oregon Senator Mark O. Hatfield to represent the entire state of Oregon in a special performance at the Kennedy Center for the Performing Arts in Washington, D.C.

As a graduate of the San Francisco Conservatory of Music, Mr. Kritzer studied with Michael Lorimer and Aaron Shearer and in master classes with Eliot Fisk, Leo Brouwer, Abel Carlevaro, Alirio Díaz, and Grammy Award Winner David Russell. He also attended master classes taught by Luciano Pavarotti, Gustav Leonhardt, Yehudi Menuhin, and Dietrich Fischer-Dieskau, and worked privately with pianist Alicia de Larrocha. After graduation Mr. Kritzer was chosen as an assistant to Mr. Lorimer in a year-long master class in North Carolina where he also gave a special tribute performance for the late Andres Segovia.

Hailed a “champion of the living American composer”, by David Maclaine of The Willamette Week, Mr. Kritzer has premiered newly commissioned works for guitar in virtually every major US city. 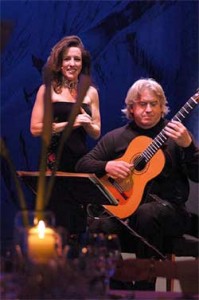 Since 1996, Mr. Kritzer teamed up with coloratura soprano and star of European Opera Janet Chvatal with Voice & Guitar – The Chvatal/Kritzer Duo, performing throughout the United States, Canada, and Europe, transforming audience with their unique romantic style. Chvatal is well-known as a “enchanting sensual songstress” for her performances in Vienna for two years as Christine in Andrew Lloyd Webber’s Phantom of the Opera, and opera and concert halls across Europe and North America. She premiered a chamber work piece, Miroirs, written especially for her by Swedish composer Tommie Haglund, for the Musik I Maj International Music Festival.

Kritzer recorded “Classical Guitar Christmas” for Miramont Records, and with Ms. Chvatal on “Songs of the Americas” and “In the Blue Hour” as works for voice, guitar and orchestra. You can purchase these here, or through Miramont Records.

What the Critics Say

He possesses an uncanny ability to seek out and commission fresh, invigorating repertoire that he invest with both robust character and poetic nuance. Able to reveal insights without resorting to exaggeration, Kritzer’s guitar takes on all the riot and color of the modern life…
Neill Archer Roan, California Center for the Performing Arts

Kritzer took an assured approach in the popular Rodrigo concerto, [for guitar and orchestra] strumming the big chords for the whole hall to hear and biting into the Spanish rhythms. But nothing could equal his work in the dreamy second movement. Kritzer’s lyricism was golden. He refused to rush, letting the solo phrases hang deliciously in the air. Would that more musicians had his courage.
David Stabler, The Oregonian

…a guitarist in the best modern American mold, clean and accurate in technique with a welcoming warmth and sensitivity to color…
Colin Cooper, Classical Guitar – London

…the large crowd sat transfixed by the captivating performance… even the sound of breathing came to a halt.
Robin Bieker, The Downtowner

After thirty years of playing, four years in a guitar performance degree program, and ten years of lessons and master class workshops I was still using a composite of haphazard methods. Scott imparts a proven, systematic, and practical way of learning and performing repertoire.
Peter Jespersen, Classical Guitar Student of the Kritzer Method

…he created an inner life in his playing, a thinking and caring musician.
Bernard Holland of the New York Times

He possesses an uncanny ability to seek out and commission fresh, invigorating repertoire that he invests with both robust character and poetic nuance. Able to reveal insights without resorting to exaggeration, Kritzer’s guitar takes on all the riot and color of the 21st century.
Neill Archer Roan, California Center for the Performing Arts

Scott Kritzer is one of those rare musicians who finds himself equally at home as a performer and an educator. He was a faculty member from 1980-2010 at Lewis and Clark and Reed Colleges in Portland, Oregon. Kritzer now devotes himself to an active private teaching studio where he shares his method developed from over 35 years of performing, studying and teaching. teacher, Scott Kritzer offers in person and online guitar classes, workshops, and conferences. The Kritzer Method is a master program, proven method for serious students of the classical guitar, based on continuous improvement and promotes long-term playing results. Beginners through professional players benefit from his unique masterful approach to guitar playing. 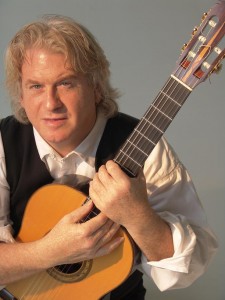 Kritzer works with students privately and in groups, building a community around his popular, common sense, method. His popular studio offer students a chance to encourage and learn from each other. He encourages the social interchange between students, hosting Guitar Movie Nights, in-home concerts and the Kritzer Studio Guitar Quartet, as well as student performances. This supportive group fills the studio with the synergy of their passion for the classical guitar and desire to reach their full potential. 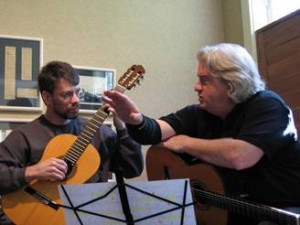 In addition to private and group sessions, Kritzer offers workshops on Theory and Interpretation, How to Learn Music, and his popular Performance Anxiety Rehab (PAR) workshop designed to help the guitar enthusiast overcome their anxieties and fears around performing in front of an audience.

Kritzer founded the successful Classical Guitar Immersion Conference (CGI)  a week-long intensive conference where participants live and study together onsite, working with experts in classical music, better understanding your instrument, performance, styles, and advanced techniques, culminating in a concert at the end of the week presented by the attendees. Click here for general information regarding Classical Guitar Immersion.

Based in Portland, Oregon, Kritzer’s students have won regional, national and international guitar competitions and gone on to attend such notable schools as The Julliard School, the Royal Conservatory of Music in London, the North Carolina School of the Arts and his alma mater, The San Francisco Conservatory Of Music.