I have an embarrassing confession to make. A few years back, I was thinking of playing in a master class for Pepe Romero. I remember thinking, “Wouldn’t it be cool if he saw my right hand and at least thought to himself, ‘Hey, this guy’s got it going on!'” I videotaped myself playing some repertoire, and to my shock, none of the principles I had learned in my technical work, aside from positioning, were evident. My movements were tight, negating the fluid affects of true alternation or sympathetic motion.

Yet I can easily replicate these movement forms in my technique. I have been teaching rules for alternation and sympathetic motion to all my students for decades, and we all exercise these movements in our technical work with scales and arpeggios. And since roughly 98% of the guitar’s repertoire is comprised of one of these two movement forms I assumed that simply mastering them in technical work would be enough to allow them to ‘roll over’ into repertoire.

Sadly, I found after decades, that these movements do not come to fruition in the sense of applying themselves to our repertoire! We must consciously and perhaps continually integrate the patterns into our repertoire if we want the benefits to manisfest in performance. This, as you can imagine, was quite a sobering realization. But, as I thought about it I realized that my performances were always less satisfying than I wanted with regards to technique. It seemed that my hand would tire, tighten and I would make mistakes that I knew I shouldn’t. At times on stage I would feel like my hands weren’t my own! But why? Well, I found two reasons. 1) These movement forms can’t exist when the distance the finger should travel is shortened and 2) the actual analysis of the movement forms must be notated and practiced into the repertoire.

First, let’s talk about Range of Motion:  the distance the finger travels whenever it makes a stroke. A shortened range of motion is tight—the result of exerting the flexors and extensors almost simultaneously. As an analogy, think of driving your car with both the gas and break pedals held down. The tightness causes tension. But, when we perform, we want to be accurate.  Here is the big disconnect: accuracy is not attained by keeping your fingers close to the strings, but by employing a motion that exhausts the flexors which results in more motion inwards.

I’ll delve more into the mechanics of the aforementioned in my upcoming release of the new Phase I – Primary Skills for the Classical Guitarist, due in the fall of 2011.

When one attempts to keep the finger close to the string by using  two opposing muscle movements almost simultaneously, the unfortunate result is tension. Tension inevitably causes you to be more likely to miss a note; in other words, make a mistake. And usually, the common reaction to a mistake is to shorten the distance to the string, in affect tightening the stroke, which in turn causes more tension. 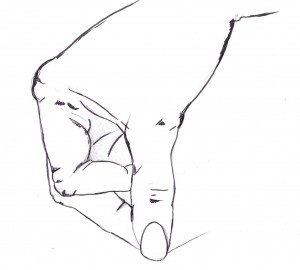 'I' in the flexed position, and 'M' in the extended position. Illustration by David Kritzer

Essentially, the muscle contracts by means of a pair of proteins. These proteins do their best work when the muscle is somewhere in the mid range; they  ‘give up the ghost’ when the muscle comes to the extent of its range. It’s in this ‘exhausted’ range (a relative term) that the opposing muscle can take over.

Here is a helpful analogy. Let’s say you’re swinging a tennis racket. If you were forced to halt your natural range of motion before its natural follow through, your muscles would become fatigued with the counter effort. But, if you were allowed to swing away, the muscles would function better, and with less wear and tear.

The first thing I noticed when playing repertoire was that my Range of Motion was shortened by the cautious desire to stay close to the string.

Note: Range of Motion is a term I began to use upon this discovery, which coincided with my research into various medical journals and books by hand surgeons on muscular function and dysfunction.

I then began to watch my hand closely when playing pieces. Making this full range of motion seemed very unnatural, but over time, I noticed a much more relaxed and accurate hand, even in performance.

My next step was to painstakingly apply the rules of alternation (fingers moving in opposed motion) and sympathetic motion (two fingers moving in sympathy, wherein the last finger to play, as the active finger, extends out the farthest), to some repertoire pieces. I made sure my pieces had all the right-hand fingerings written in, and began to mark out sympathetic motion patterns. My marking system is to place an arrow between the two fingers operating in sympathetic motion. All other fingerings, then, are either in alternation, or in rarer cases, are repeated notes. I also watch my Range of Motion here. When doing Sympathetic Motion, consider a new position called ‘hyper-extended’ wherein the finger is extended to the point where it almost clears the sight line of ‘P’. Integrating this into your repertoire is called Right-Hand Mapping.

I began to do this with my students and realized, somewhat to my surprise, that about 98% of all fingerings can be boiled down to alternation or sympathetic motion. (I had estimated, in my osmosis-theory days, that it was about 80%.) I did find some other patterns that combine two fingers moving against a single finger. I call these ‘Complex Alternation,’ and I have added them to my technical work (and to that of my students).

I began to work all my repertoire with at least the Range of Motion principles, and as time permitted, I applied the Right-Hand Mapping to specific repertoire pieces. I also started doing my technique with a ‘momentary relaxation’ in the palm in between strokes (without releasing the finger that is either extended or flexed). I came across the momentary relaxation concept when I learned about ‘active recoil’ in the extensor muscles, which is available when a finger fully flexes. I’m happy to say that I integrated it into my repertoire, practice, and performances quickly!

With the application of these principles, my playing has never been on a higher level. I have performed a number of concerts using these applied concepts, and not only is my hand tension-free throughout the performance, but my accuracy has skyrocketed. Finally, after two years of work, I am performing with a fraction of the effort that I used to expend! For the first time, the benefits of my technical work are manifested in my performances.

I’d also like to say that by widely applying my Right-Hand Mapping to pieces, it is working even in some repertoire where I have yet to work out the right-hand patterns. So, perhaps, with the correct training, this can become second nature. Let’s hope so!

If you’d like to get started with Right-Hand Mapping, make sure you’re applying your Range of Motion awareness, and then start to deliberately insert the practice into one piece and then another. At first it will feel a little strange, and your accuracy may temporarily go down, but smoothness and a sense of control will surely manifest!

Please let me know what you find! I’d be happy to answer any questions.

2 Responses to Integrating Technique into Repertoire