While studying with Michael Lorimer in a special year-long master class off the coast of Wilmington, North Carolina in 1980 I was given the opportunity to play for my teacher’s teacher, Andres Segovia.

Maestro Segovia was to be awarded the Albert Schweitzer award for music, coincidentally, at the University of North Carolina in Wilmington, where our year long master class with Michael Lorimer was held. Having heard that Segovia hated beards I shaved mine off the night before and arrived only assured that I, along with the other students, would get to meet him.

Michael and Jude met with the Maestro first as we all nervously awaited our introductions. 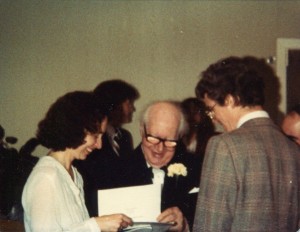 Jude and Michael with Segovia

After introductions and a few autographs Segovia sat with Michael and began to speak. We sat at Segovia’s feet with a ring of newspaper and television reporters forming a ring around the group, cameras clicking and whirring. Eventually Segovia asked if some of Michael’s students would like to play. Fear ran though my body like an electrical shock. But as each student got up to play I was envious. 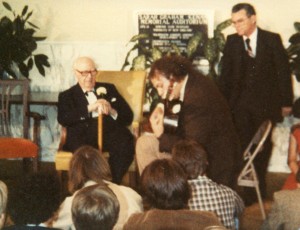 Dominic Bertucci playing for Segovia with Elias Barriero looking on

Envy would return to fear as each player finished and I kept my gaze away from Michael’s but alas, my name was called.

I was working on the Tarentella by Mario Castelnuovo-Tedesco. The Tarentella represents a frantic 17th century dance which a tarantula bite victim was to engage in to save his life. A more fitting piece I couldn’t have chosen.

As I began to play I noticed how fast I was playing. Wow, I thought to myself, I can’t slow this thing down. Faster and faster the piece went, I was in ‘no-man’s-land’ and on the verge of a total wipeout – feeling like I was riding a roller coaster and the car was cornering on two wheels. But, hey, I finished! I remember being somewhat pleased with myself. 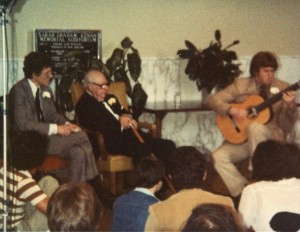 That's me performing the "Tarentella" by Tedesco

A long pause followed. After each student’s performance Segovia had made a few nice comments, smiled and clapped lightly. But for my performance he was silent. He then turned to Michael and said in a thick Spanish accent “he, ah plaze ah do fayst” (“he plays too fast”). With a look of strained anger he turned to me and repeated, “you ah playa do fayst, DO FAYST!!!!”. Next came more comments, this time in Spanish, accompanied by the waving of his hands and while the cameras whirred in the background he stood up (at which point, in reference Michael and I stood also) and looking at the crowd, just in case my humility hadn’t reached the media, Segovia said to everyone “Do fayst”, turned and stormed out of the room. As Michael followed I got a glance of utter disgust. There I stood, all the world to see, my fellow students, the media, for all I know my mother, my father, Gail Truesdale, my first girlfriend in grade school, all shaking their heads in disgust.

I’ve only felt what I’m about to describe twice in my life (both times with the guitar in front of me). I felt as if I were falling between two slabs of ice, into a bottom-less pit. My head spun and my stomach turned and while I stood there in shock the reporters began to pack their cameras up as my fellow students got up to congratulate each other.

Heading over to a local brew hall afterwards I sat amongst my friends yet all alone. Numb, silenced. I would have drunken myself into a stupor if it weren’t for the realization that when I came to I’d still have the memory, along with a hangover.

So here’s the rub – some 30 years later I reunited with my teacher Michael Lorimer in preparation for the recording of my CD Romance for Guitar. As the week wound down Michael was in a rare form, telling Segovia stories. I mentioned the events and we laughed and then he revealed something. Segovia had heard that Castelnuovo-Tedesco was disappointed with Segovia’s recording of his works, in particular, the Tarentella. Segovia confronted the composer and after a series of poison pen letters vowed to never ‘offend’ Tedesco by playing his music, ever again. A few months later I stepped in it with my reminder.

So, I guess I can stop feeling so bad and heck, I’ve had other humiliations along the way….but I’ll save those for another posting.

12 Responses to Playing for Segovia