The following is a recent post on the DelCamp Classical Guitar Forum in response some threads on Performance Anxiety. This was a response to using beta blockers and other ideas for helping with PA. Seems there might be interest in another PAR Workshop this fall (moved up from next Spring). If you want to keep posted please SUBSCRIBE.

I’m not a big fan of beta-blockers. I dabbled in these for a while on a very small dose. I found (and others who admitted to have taken them), memory to be an issue. I was relaxed, maybe too relaxed and a little ‘numb’ and a bit forgetful. It was a funny trade-off; be relaxed but manifest a performer’s top fear: forgetting the music.

I think performance anxiety (nerves) and the physical manifestation of such can be dealt with two ways. Performance anxiety (and your good suggestions of breathing, letting go), etc. are best done in practice. Doing them just before a performance won’t be as effective as practicing these concepts into a piece, (if that is what you’re suggesting). I teach a Performance Anxiety Rehab Workshop and we’ve come up with a fun pneumonic: B.L.I.S.S. which stands for Breath, Listen/Let Go, Integrate*, Slow, SLOW.

Even with all those skills working for a player the negative affects associated with nerves, (shaking hands especially), can just show up. My students are well trained to kick into the BLISS mode to alleviate them. One of my CGI students last year finished the first set of the student recital with the [em]Allegro[/em] from [em]La Catedral[/em]. After the concert he told me that despite playing well he felt out of control, that his left hand began to shake, which was odd for him. Now he wasn’t originally planning on playing this work but it fit so well for the program that I persuaded him to, even though it wasn’t quite up to tempo when he arrived. (He’d been doing what I suggested; SLOW PRACTICE.) So he brought it up to tempo and did a fantastic job. In fact, certain passages he’d never played better. I then asked him when he had ever seen a player of anycaliber that piece as his or her first piece! 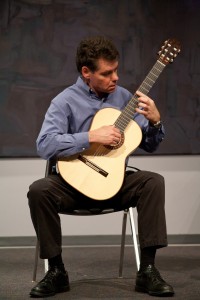 But back to his shaking hand. He said he just started to breath, let go, listen, slow the piece a bit and things went better than he felt! I reminded him that had he not practiced these techniques consistently they would not be so readily at his disposal and his performance could have easily gone the other way. (You know, the one we all dread.) Another student performed the Valse, Opus 8, (opened the concert) and had the same experience (right hand shaking) with the same wonderful results.

Regarding breathing; I learned that when we take a deep breath a nerve that runs from the base of the brain to the stomach stimulates the outer wall of the stomach which contains seratonin. The seratonim then travels back up to the brain, disengages the fight or flight orders resulting in a slowing of the heart beat and ultimately the breadth.

I submit that when we are in this relaxed state that we better access the good learning we’ve embedded in our myelin (the memory around the nerves), and the more we can recall. In David Brooks’ book The Social Animal the author states that: When a beginner learns a task, there is a vast sprawl of brain activity. When an expert does it unconsciously, there is just a little pulse. The expert is performing better by thinking less. When she’s at the top of her game the automatic centers of her brain are controlling her movements.

He also states that the conscious part of the brain is capable of processing about 40 bits of information a minute. The sub (or ‘adaptive’) part of the brain about 200,000 per minute. Think of them as processors. I ask students, in crunch time, which processor do you want working for you. When we realize this we come to understand the importance of focus in practice.

I teach students to first train or practice (input) and then work on relying on that training in performance (output). If the training is good and the performance skills are learned the player has the ability to tap into that bigger processor and the output can closely match the input. Or as Tim Galloway puts it in his book The Inner Game of Music, “Performance = potential – interference”.

So when I catch my mind wandering in practice I bring it back to the directive at hand, knowing that every minute I’m practicing I’m laying the foundation for performance.

*The Integration refers to performance practice directives taught in the workshop. But those unfamiliar with my workshops can certainly do the others with good results.

Please let me know your thoughts and experiences!

6 Responses to Thoughts on Performance Anxiety