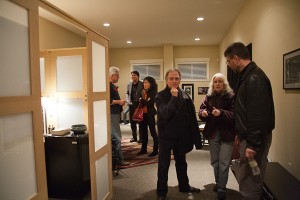 Jeffrey Elliott and Cyndy Burton in the new Kritzer Studio

It was an exciting night – thanks everyone for your participation. It was a nice mix of students, friends, and fans! I welcomed everyone in the main area of the building, and shared some of the upcoming events.

Part of what made this evening special was the performance I was able to share with my first teacher, my brother Jack Kritzer. Beginning a week-long family visit was a nice way to share some exciting studio news and at the same time give my brother the nod he deserves for igniting my interest in the guitar, an interest that grew into an obsession and eventually a career. When I began my classical guitar lessons, Jack joined me, and for a year we’d drive and study together, working on the same technical exercises and assignments. 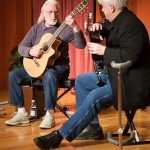 On the night of the Opening, we performed a mix of classical and pop music in the Euphoria Studios down the hall (the home of future Kritzer Studio Student Recitals). We spent so much time catching up that day that we didn’t set the order until people filed in for the performance. I jokingly reached over to correct his right hand position after he played, but I couldn’t seem to rattle my older brother. (I even tried psyching him out earlier in the day, but the guy has nerves of steel!) People commented that they noticed the brotherly rivalry – something that just comes as naturally to us as does the signature Kritzer silver hair (we were both redheads in our youth). 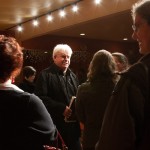 We had a nice time chatting with those who stayed afterwards. And then we were off to Clark Lewis for a great post-event reception with my wife, my boys Andrew and David, my brother, and my best friends from high school, Phil Morford, Robin Bieker, and Joe Keller. 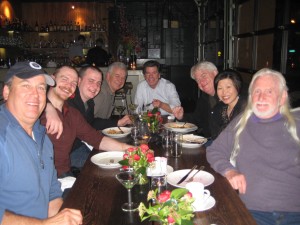 I hoped to express my thanks to those who have helped me get where I am today. I don’t believe anyone achieves success without the help of others, and I’ve had a number of ‘angels’ who have made that happen. In addition to my personal friends who have come through for me, I thanked my teachers and especially my students, who have given me the inspiration to define a new method for the classical guitar: which I’ll soon be releasing and will hopefully have finished by the end of this year. For those who didn’t make it, let me get you up to speed on the new Kritzer Studio news – there something for everybody, including new classes, performances, and special appearances in the studio. Here are some of the highlights: