Its great to see the function in the young hands of Ibrahim, Ogden and Michael Hermes. These players have worked hard on positioning and the concepts of alternation and sympathetic motion – important movement forms found in the classical guitarists’ repertoire. These movement forms, when mastered in technique, are bridged into repertoire through right hand mapping. (Covered in Chapter 5 of my upcoming book on classical guitar technique)

Thanks to students Ibrahim, Ogden and Michael Hermes. Notice Ogden’s ‘groan’ as we begin as well as Ibrahim and Ogden’s exasperating photo after we finished. 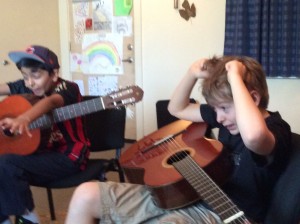 Ibrahim and Ogden Show Their Excitement for Technique Work