Back in the Saddle – In Performance with the Acoustic Guitar Masters

It’s been a long year of recovery. Most of you know that I took a bad fall off some stairs last January. I had to have my patella and quad muscles reattached. Nasty and painful business with a year long recovery, the anniversary of which is coming later this month! So now I’m jumping back on the saddle for the first time in over a year. Fortunately my load will be greatly lightened as I have the honor to be sharing the stage with two great musicians, Eric Skye (acoustic jazz guitarist) and Mark Hanson (fingerstyle guitarist) when we revive our Acoustic Guitar Master’s program from October of 2014. 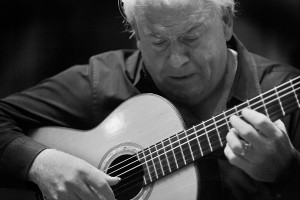 Getting back into playing and performing shape was a fascinating sojourn. I’m at once grateful for what I’ve learned (both personally and musically) and weary of ever being forced into a recovery mode again. I was immobile for the first quarter of last year while I worked on musicianship skills away from the guitar. Singing and conducting my repertoire gave me a new appreciation for the nuances that I had been missing in even my long standing repertoire! I only started to practice again last May, and on a limited basis.
Then I spent the summer studying and advancing my technique and in the fall began to layer that work into my repertoire pieces. I’m both excited and nervous about stepping back on stage again to see where I stand. But fortunately I’ll be standing (well sitting) next to two fantastic musicians.

Acoustic Guitar Masters was formed in October of 2014. Eric, Mark and I took turns playing 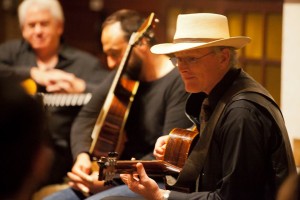 our own individual repertoire in front of an excited audience. I felt so fortunate to be sitting on stage watching Mark and Eric perform.  It felt like I was both behind the curtain and in the audience.
This year we’ve added some duets and trios to our program, among them Summertime, the Afro Cuban Lullaby, Mark Hanson’s Canyon Canon and Jose Luis Merlin’s duet based on Fernando Sor’s Study in Bm. (Hearing Eric and Mark improvise around my arrangement of Summertime is inspiring – it’s a ‘gas’ to be a part of their creativity – and all I gotta do is keep the chords straight).
We have two performances coming up – first we’ll be performing for the Tehema County Performing Arts Series on Friday, January 15th at 7:30 pm. in Red Bluff, California. The following day we’re travelling to Eugene, Oregon to perform in the Ray Kraut Studios. That’s on Saturday, January 16th at 7:00 pm. For tickets contact Ray Kraut by phone at (510) 338-2031 or by email at krautguitars@gmail.com.
The AGM will be performing in Eastern Oregon this coming April. Look for a date sometime soon in the Portland area!
Scott