Portland Classic Guitar (PCG) is pleased to announce the Portland Classic Guitar/Marylhurst University Benefit Concert, featuring some of Portland’s finest classical guitarists: Scott Kritzer, John Doan, Peter Zisa, Jeff Ashton, and Dan Cosely. The concert will take place on
Saturday, October 5th, 2013, at 7:00 PM, in Marylhurst University’s Wiegand Hall, located at 17600 Pacific Highway (Hwy. 43),in Marylhurst, OR 97036-0261. It will benefit the widely respected PCG Concert Series, as well as the Marylhurst University Guitar Department, which has generously provided its beautiful venues for most PCG concerts over the last few years. A portion of the proceeds will also help with medical expenses incurred by PCG proprietor William Jenks, who was recently in a bad motor vehicle accident, breaking both of his wrists, and requiring expensive surgery. (Jenks is expected to make a full recovery, and will return to performing soon) 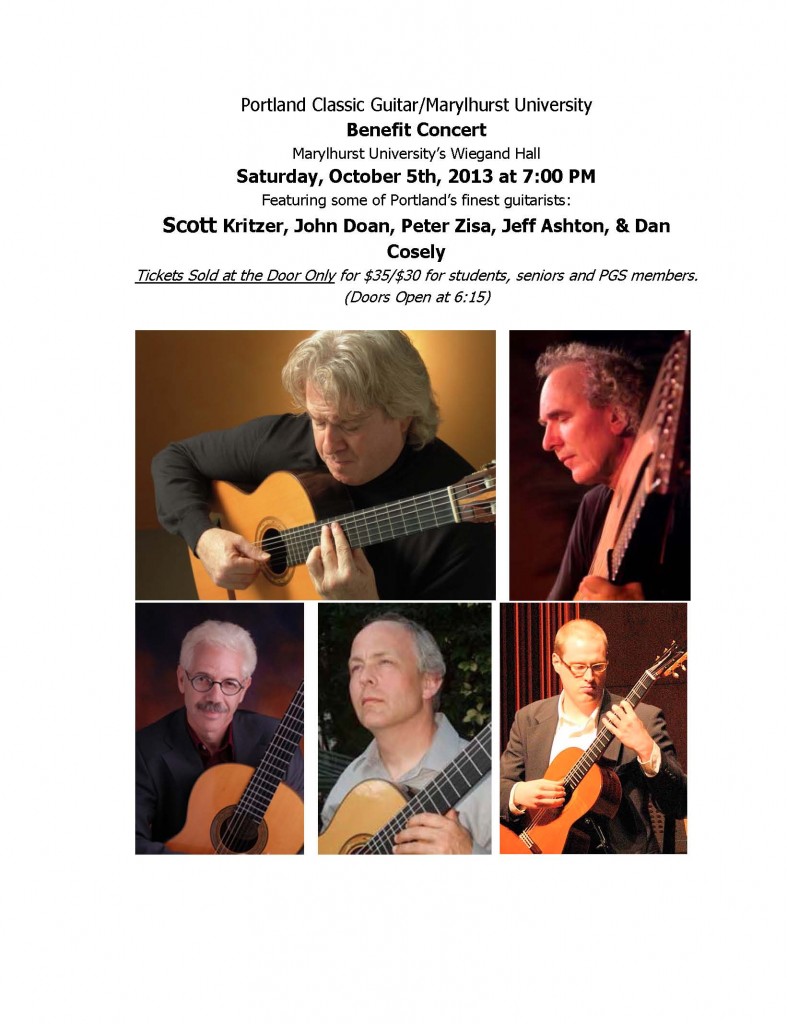 The PCG series has earned a reputation for presenting the very best in classical guitar music, and this concert will be no exception. According to the New York Times, Scott Kritzer is “intelligent and self-assured”; his “sure technique” and “musical sensitivity” reveal him as “a thinking and caring musician.” For decades, Kritzer has garnered similar accolades from audiences and critics alike, in concert halls from New York to Munich to San Francisco to Frankfurt to Vancouver to Los Angeles to Sapporo to Washington, D.C. (where he once performed at the Kennedy Center for the Performing Arts). He has shared the stage with such brilliant artists as Itzhak Perlman, the Emerson String Quartet, and the Kronos Quartet. A graduate of the San Francisco Conservatory of Music, Mr. Kritzer has studied in master classes with Eliot Fisk, Pepe Romero, Grammy Award winner David Russell, and many others.

John Doan is an international authority on harp guitar—an unusual instrument that includes extra, unstopped strings. He is a performer and composer who has worked with such luminaries as Donovan, Burl Ives, Larry Carlton, and Chet Atkins; he is also a historian, instrument collector, and associate professor of music at Willamette University. Doan’s music has a strong classical influence, while also drawing on folk (particularly Celtic) traditions. He may be best known for two television specials produced by OPB 1990s: A Christmas to Remember With John Doan and his Emmy nominated A Victorian Christmas With John Doan, which has been a favorite with audiences for over 20 years. This concert, he will be performing selections from his newest recording Homage to Fernando Sor on a guitar built with 5500 year old wood and he will demonstrating a new prototype harp guitar.

The other performers to be featured in this benefit are equally impressive. Consider Jeffrey Ashton, who has enjoyed a forty-year career as a performer, arranger, composer, recording artist, and teacher. Ashton’s adventurous repertoire is known for ranging freely through disparate musical periods—from the Medieval, Renaissance, and Baroque, to works by Sor, Tarrega, Villa-Lobos, and Satie. Peter Zisa, in turn, is a masterful award winning classical guitarist “who delicately blends melodic line and texture into an exciting musical experience”(Louis Sahagun, L.A. Times); his playing “transcends mere technique to a higher level of musical artistry” (University Santa Barbara). Peter is grateful for the mentorship of David Grimes, and additional musical guidance he received from Maestro Andrés Segovia, José Rey de la Torre, and José Tomas. He has performed at universities and various concert series across the U.S. and abroad. And finally, Dan Cosley, according to renowned French guitarist Roland Dyens, “is a real, gifted musician with genuine skills as a composer. He belongs to a restricted community of guitarists who place music even above the guitar and that’s the main reason why I believe in him.” Cosley has a rapidly expanding discography, releasing ten CDs over the last decade. He has created noted compositions and arrangements, and has performed throughout the United States, and also in Rome and Japan. He is currently director of Guitar Studies at Marylhurst.

Tickets for this event will be sold at the door only for $35 General Admission and $30 for students, seniors and Portland Guitar Society members. More info call 503-654-0082.