The Times Article – by Ravleen Clark 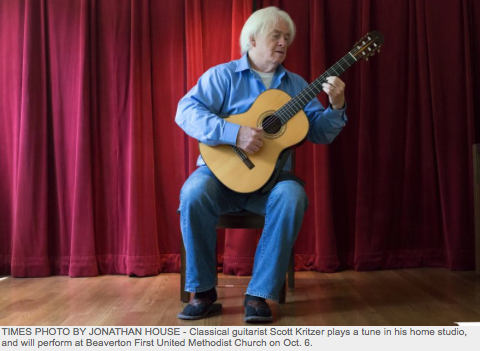 While all his high school classmates were listening to Led Zeppelin back in the early 1970s, Scott Kritzer was listening to “Five Bagatelles,” classical compositions for the guitar written by William Walton.

Kritzer picked up the guitar at age 9, and after a series of short, intense lessons from his older brother, began buying songbooks and working through collections of music: folk guitar, rock guitar, jazz guitar.

“I had exhausted most of that music,” said Kritzer.

But when he happened upon classical guitar music at a concert, he saw infinite possibilities.

“I just saw a great, fertile place where I could keep exploring,” he said.

None of his fellow students at Tigard High School (he graduated in 1973), where he was a football star, knew he played music.

Kritzer, who lives in Beaverton, is a renowned classical guitarist who has played all over the world, including at Carnegie Hall in New York.

But when he was 18 years old, he faced a crossroads when he made the bold decision to pursue music education after high school.

“I announced it to my previously supportive parents and they flipped,” said Kritzer, who turned down a football scholarship, moved to California and began working to save money to attend the San Francisco Conservatory.

Eventually, he became a student of Michael Lorimer, who was a student of Andrés Segovia — considered by many to be the founder of the modern classical guitar movement.

“It’s kind of nice to be a part of that lineage,” said Kritzer.

Kritzer moved back to the Portland area in 1980, and taught at Lewis & Clark College and Reed College for years before settling into private tutoring.

Over the years, he’s continued to tour all over the world, playing his repertoire of Baroque, Spanish and contemporary pieces, often translated for the guitar from other instruments.

“The music, it speaks differently on the guitar,” said Kritzer. “There’s a natural intimacy.”

Classical guitar marries and muddles the line between the street and the chamber hall, between a “popular” instrument of the masses and an “elite” genre of music.

“We can play James Taylor and we can play Bach,” said Kritzer, describing the guitar’s mobility and versatility.

With the angle of his wrist on the wood and the stroke of his fingers on the strings, Kritzer draws out a wide, exquisite tonal range.

“You feel like you’re a painter with a palette for 50 different colors,” he said. 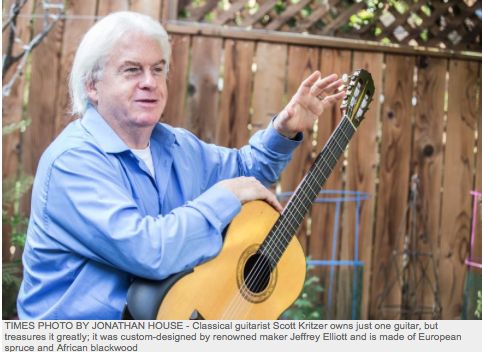 Sitting in his small home studio that opens up to a verdant yard, Kritzer demonstrated the colors he could evoke with different musical phrases.

“You can take your right hand and move it down towards the bridge of the guitar, and when you play down there, the sound is real brittle, and bright. It has a real distant … sound to it,” said Kritzer. “If you bring your hand to the opposite side of the guitar, it is a rich, warm, beautiful sound.”

Kritzer owns only one guitar, custom-designed by renowned maker Jeffrey Elliott, and has played it since 1989.

“Because these things die out. If you don’t play these guys for a few weeks, the wood stops moving. It needs to be exercised. It likes to be talked to, you know?” said Kritzer.

The guitar’s materials, a combination of European spruce and African blackwood, make all the difference. Whenever Kritzer has a few minutes to spare, he picks it up.

“I’ve held this thing in my lap more than I’ve been married, more than my kids have been alive,” said Kritzer. Playing the guitar “got me through puberty, through a divorce.”

While he admits that it’s hard to stay away from his guitar, Kritzer admits that sometimes, distance is what he needs to really understand a piece of music.

He spent several afternoons this month sitting in his garden, practicing pieces on a keyboard.

“I realized things like, ‘I didn’t know that voice was there,’ or ‘that doesn’t sound right,’” said Kritzer. “The translation can be effective if you take yourself out of playing it all the time.”

To this day, Kritzer finds himself breaking new guitar ground — all thanks to teaching.

“I’m out there kind of swatting the bushes in the trail, then I take my students and that’s how I teach,” said Kritzer, who explores new concepts with those learning from him. “I don’t know if I could play without teaching.”

Kritzer has spent the past 12 years developing his signature method and writing a technical guide to impart his knowledge, which will soon be published online. Students master hand positions and movements, then learn to “let go” during performances.

“When you can learn to completely relax your hand, the conduit of music opens up to a much broader spectrum,” he said.

Some of his students have performed during a “Fireside Chat” series, informal gatherings that Kritzer holds at Beaverton First United Methodist

Church every month for guitar enthusiasts and the public to share music and ask questions.

At the next event, at 7 p.m. Oct. 6, the theme will be “What Makes Baroque Music Baroque?”

“I thought it would be nice to build community here,” said Kritzer. “(Beaverton) seems like a community that is ripe, artistically and culturally.”