The following is their description of the event and images from the week long conference bringing together a small but passionate group of classical guitar players from around the world to meet and study in master classes with Scott Kritzer and other professionals and experts in the guitar industry. 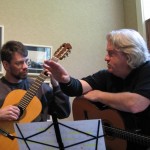 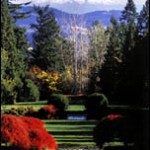 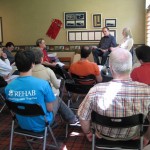 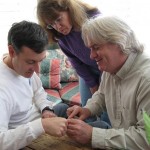 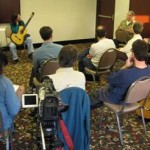 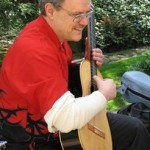 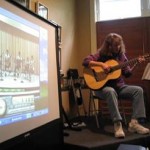 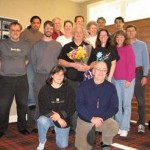 Led by one of America’s premiere classical guitar teachers and performer, CGI is a synergistic learning experience, built on developing technical foundation, performance skills and friendships to last a lifetime. Master Classes geared towards a final student performance, lectures, and guest performances make this an all encompassing event. Last year’s sold-out event drew participants from all over the United States.

The week long conference features several concerts by the teachers and guest presenters, as well as a final student performance at Agnes Flanagan Chapel, a beautiful performance hall.

During the week, there will be private consultations with Kritzer and his team, technique workshops, master classes, and demonstrations. Topics covered include classical guitar practice techniques, maintaining a practise log, and more.

Donna Zitzelberger will present a special workshop on teaching classical guitar to young people, a treat for participants who offer lessons. Jeffrey Elliott, acclaimed luthier, will present a workshop on guitar building and construction.

Kritzer will also be offering his Performance Anxiety Rehab (PAR) workshop to address stage fright and how to overcome it.

Mr. Kritzer’s consummate commitment to technical excellence as the solid structure beneath an unparalleled sense of musicality has since brought him over a decade of accolades from audiences and critics alike, in concert halls in San Francisco, Frankfurt, Vancouver, B.C., Los Angeles, Sapporo, Japan, Washington, D.C., Munich, and New York. Mr. Kritzer is also a highly sought after instructor of the classical guitar. His popular method is taught to both local students through private and informal workshops, online and off. His students have won regional, national and international guitar competitions and have gone on to attend such notable institutions as The Julliard School, The Royal Conservatory of Music, and his alma mater, The San Francisco Conservatory of Music.

Donna Zitzelberger has over 30 years experience on the guitar, and works professionally with flute, voice/choirs, piano, and percussion ensembles for both recordings and live performances. She teaches the guitar in Thousand Oaks, CA privately and in her after-school program where children are given much performance opportunity. She has studied directly under the founder of “Guitar Principles”, Jamie Andreas and is a certified instructor of “The Principles” methodology. Currently, she is co-authoring a children’s version of “The Principles of Correct Practice for Guitar”. She is a classical guitar student of Mr. James Smith, the Chairman of the Classical Guitar Department at the University of Southern California. She has also studied under Mr. Scott Kritzer. Donna’s passion is teaching children excellent guitar technique in an atmosphere that balances the hard work of instrument study with loads of fun.

Jeffrey Elliot is a world premier luthier specializing in the acoustic classical guitar. Majoring in Fine Arts at Michigan State University, Elliott studied and apprenticed with Richard Schneider for six years, eventually creating his own guitar building shop. One of his guitars was featured in the 1978-79 Renwick Gallery exhibit, “The Harmonious Craft,” in the Smithsonian in Washington, D.C. He is a long time author and contributor to the American Lutherie magazine and other international guitar publications. He has been the organizer for Portland’s annual Handmade Musical Instrument Exhibition since 1975 and has taught guitar making privately and in workshops since 1972. His clientele includes some of the best in the guitar playing genre, including Julian Bream, Ralph Towner, Joan Doan, Burl Ives, Leo Kottke, Jonathan Leathwood, Dick Weissman, and Earl Kluge.