called Fireside Chats to be held in the Beaverton First United Methodist Church’s Fireside Room. Kritzer, who often engages his audiences in concert, will discuss the stories behind the music in a friendly, informative and entertaining style.

And prior to each ‘chat’ there will be time for localclassical guitarists to perform. So whether you’re a player or someone who simply enjoys the classical guitar please come and enjoy the evening.

rton MaiBeaverton located at 12555 SW 4th Street in Beaverton, n Library) from 7:00-8:30 pm. These chats are free and open to the public but room is limited so you’ll need to RSVP. (See below).

If you’re interested in performing  please R.S.V.P. me at scott@scottkritzer.com by the 1st Tuesday of each month.  So, invite your friends, bring along your guitar or just come and enjoy! 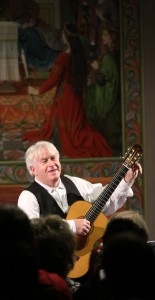 Scott Kritzer has demonstrated his musicality and commitment to technical excellence in concert halls in San Francisco, Frankfurt, Vancouver, B.C., Los Angeles, Sapporo, Washington, D.C., and Munich, including in critically acclaimed performances in New York’s Carnegie Recital Hall and Wigmore Hall in London. In Classical Guitar Magazine, Colin Cooper wrote of Mr. Kritzer in his Wigmore Hall debut: “a guitarist in the best modern American mold.” New York Times critic Bernard Holland wrote of Kritzer in his Carnegie Hall debut that he is “an intelligent and self-assured musician with a sure technique and a deep musical sensitivity.”

Kritzer graduated from the San Francisco Conservatory of Music where he studied with favorite Andres Segovia protégé Michael Lorimer.

He has released a number of recordings:  Romance for Guitar and A Classical Guitar Christmas,  and in collaboration with soprano Janet Chvatal:  In the Blue Hour , and Songs of America.  He has performed as soloist with the Oregon Symphony Orchestra, the Oregon Ballet, and with multiple chamber orchestras and string quartets throughout the the Pacific Northwest.

Kritzer has been featured in guitar magazines published in the US, London, and Japan, and is a frequent guest on the Portland-area radio station KQAC, All Classical Portland.

In addition to maintaining a busy concert schedule, Kritzer is a highly sought-after instructor.  Many of his past students have won regional, national and international guitar competitions, and have gone on to attend such notable schools as The Julliard School, the Royal Conservatory of Music in London, the North Carolina School of the Arts, and the San Francisco Conservatory of Music

Scott Kritzer
This entry was posted in Concerts and Events, Guitar Tips, Stories Behind the Music and tagged andres segovia, classical guitar. Bookmark the permalink.